While I know this generation of students will simply pull out a phone to find a location, I still like to spend time teaching longitude, latitude, and other map skills. I want my students to have a mental map of the United States and the world in general. I want them to have a general sense of north and south, and I think the math aspect of calculating distances between two points and understanding the way maps work reinforces many thinking skills. My students were not really getting the coordinate grid system for longitude and latitude, so I compared it to the game of Battleship. Hands suddenly shot up. “I play that game!” 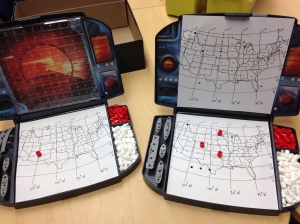 If you can play Battleship and pinpoint a location on a grid, you can understand longitude and latitude. I converted a U.S. map into Battleship size and attached it to Battleship game boards. My students agreed to bring more games from home, and we had a few game days in class. It was a hit (pun intended)! 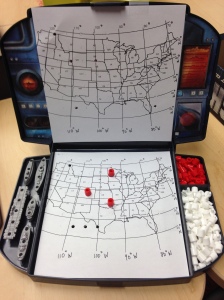 How Can Students Practice Longitude and Latitude?

Setting Up the Game

Kids don’t always have to be reading chapter books to build good reading skills. Mr. Star Wars and Miss Priss enjoy reading magazines targeted at elementary aged children, and we have a few subscriptions delivered to our house monthly. We particularly like the National Geographic Kids, but we like Muse and Spider as well. When we finish reading at home, I donate the magazines to my classroom library. Recently, my fourth grade students and I worked on several activities to reinforce better non-fiction reading and expository writing skills using the magazine text features for guidelines.

Standard non-fiction text features like captions, tables, sub-headings, and sidebars are great ways for students to clue in on the main idea of what they are about to read. If students have a prediction about the general topic in their reading, they will anticipate certain vocabulary and ideas, and their reading will be more accurate. We completed a fun iPad activity where students went on a text feature scavenger hunt. I gave each student 3-4 magazines to peruse and a Magazine Text Features Definition List. When the students located one of the text features, they snapped a picture. Once they had at least 7 different examples, they pulled the pictures into a PicCollage and labeled their images.

Reluctant readers often do very well with the short articles and images you find in magazines particularly if the magazine focuses on a specific interest of the child. Help your reader clue into the common features of magazines and build those reading skills. 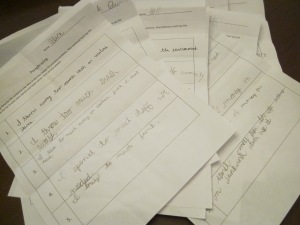 There are many reasons paraphrasing is important for school aged children. It enhances vocabulary. It forces students to change ideas into their own words, which confirms understanding. It builds a stronger memory when words have been changed into your own personal version. My students practiced paraphrasing this fall, so we would have a foundation for notetaking when we start the big research project in January.

If your child is having trouble with paraphrasing and notetaking, start by paraphrasing single words. Look at key words in a paragraph or reading passage and replace the “important” word with a synonym or group of words that will mean the same thing as the original. This activity has the added bonus of building a student’s vocabulary bank.

Next, try replacing chunks of words. Work with short phrases. Instead of “under the sofa,” you could say, “beneath the couch.”

Finally, break a paragraph into the main idea and 3-4 key details. Make a list of the main idea and details (this will look similar to an outline). Now, ask the student to convert the list into sentences using their own words.

After my class went through the steps of paraphrasing words, phrases, and whole paragraphs, we reviewed by playing a written version of the telephone game. I pre-wrote detailed sentences in the first row of about 8 Paraphrasing Sentences Charts and made enough copies for a class set. I gave each student this Paraphrasing Sentences Chart with the starter sentence. The student paraphrased the sentence that appeared in the first row of the chart and then folded the paper, so only the newly written sentence appeared (row 2). The students traded papers and repeated the procedure. We traded papers 4 times, and at the end, unfolded the papers to read each version of the sentence to see if the message from the first sentence stayed the same as the words written in the final sentence.

Sometimes the message from the original sentence stayed the same; sometimes it didn’t– just like the real telephone game. We had fun reviewing the changes in the sentences from one line to the next, and handwriting played a big factor in whether the sentence stayed on track! 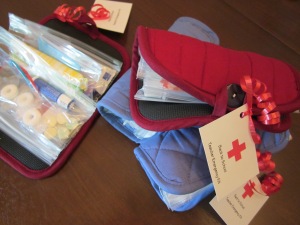 Have you entered to win a fabulous Back to School Teacher Emergency Kit? The giveaway ends Sunday, August 4 at 7 pm (EST). Two winners will be selected.

Worried you might not win but want an Emergency Kit anyway? Click here or here for directions to make one yourself.

I know it may seem like I am not getting much accomplished now that I am on summer vacation, but I must be doing something because I am exhausted at the end of the day. Aside from the Cocktail Testing, my kids and I figured out that Cups Trick Thing, we go to swim practice in the mornings, and I unloaded the dishwasher and folded a load of laundry.

I have also been playing a lot of cards with my kids. My parents visited and kicked off this latest activity. We mainly play Crazy 8s, Solitaire, and War. I was “over listening” to Mr. Star Wars talk to himself during a recent game of solitaire, and it dawned on me how many skills are wrapped up in a card game.

** If you are unfamiliar with the rules of play, click here for Crazy 8s, Solitaire, and War. 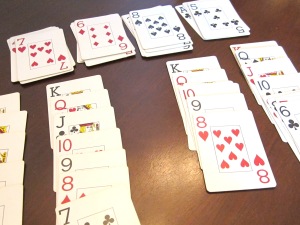