I think it is mandatory for all little boys to want a construction or tool party at some point. My son was no exception. He had a real tool thing going when he was little. For his second birthday, we threw a construction and tool party that was a great toddler party. But– stay tuned– because I also am including a variation to this party for older kids (and by “older” I mean up to adult aged kids) at the end of the post. This is another PB (pre-blog) party, so my photo choices are limited.

The Invitations: I had two options for the invitations. We ended up using an invitation that showed a boy and his tool belt, but I also had some dump truck invitations that I included in the picture above.

The Activity: For weeks, I saved paper towel rolls, toilet paper rolls, egg cartons, cereal boxes and other recyclable materials. I purchased Elmer’s glue, craft sticks, wooden dowels, foam stickers, wood blocks, foam blocks, and any other materials I thought could be used in building. I set up two low tables in our basement and covered them with butcher paper. I set all the materials on the tables, so the guests could walk up and create. 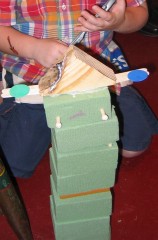 The Party Favor: The Dollar Store had plastic tool kits. I put the tools in a Lowe’s canvas tool belt and wrote guest names in Sharpie pen across the front. We tied these on the guests as they arrived, so they could use the tools while building with the recyclable materials.

The tool belt pictured was a birthday gift, but the Lowe’s belt party favor looked similar.

The Cake: I used a bakery in New Orleans for this one. They created a rocky terrain with icing then set construction vehicles onto the cake. 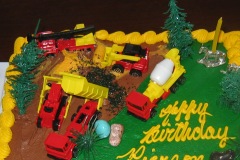 The Food: We served nuts and bolts (Chex Mix), Fritos, and small sandwiches with the crusts cut off. The food choices were not anything super exciting, but I borrowed all of my son’s dump trucks, lined the truck beds with coordinating paper napkins, and used those as the serving dishes. That was a good little detail! 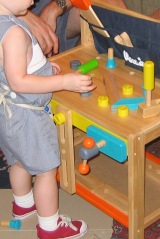 The Gift: My parents gave my son a play workbench, which is one of the best I have ever seen. For a little bit bigger child, a great gift is the Real Construction sets. 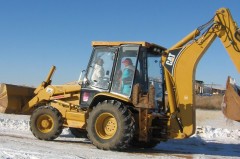 The Older Party: This past year, my parents won a “Tonka Party” at a charity auction. A construction company had donated a trip to the site where they keep all of their equipment. My mom booked the party over Christmas when all of the grandkids, kids, and grandparents would be together. She invited some other family friends too. The party included rides on the big equipment like the back hoes, pulling the air horn on the dump truck (believe me, the adults lined up faster than the kids), and climbing around on the front loaders and other big trucks. I am not sure if you have a local construction site willing to do this, but it sure was something different. My mom made sack lunches for all of the guests and served Bloody Mary’s for the big kids and hot chocolate for the little kids.