Sometimes, the first sentence is the hardest part of writing for me. Most of my students feel the same way. To cope, they revert to the default starter sentence, “This is my story about _____.” Or, if I am lucky, I get the alternate topic sentence, “I am going to tell you about _____.” Both of these options pain me. I am working hard this year to banish bad topic sentences.

Students can write catchy topic sentences if they see lots of examples that grab their attention. Recently, my students researched one aspect of a Native American tribe and wrote an article about their topic. After they researched but before they began drafting their articles, I had the students flip through my magazine collection. To complete the Magazine Hook Sample Activity, the kids looked for 3 feature articles in different magazines and copied the first sentence only. 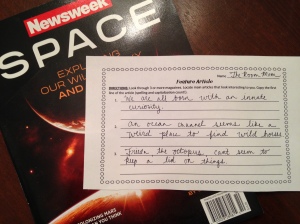 After collecting a big list of first sentences, we shared and discussed. When we compared the topic sentences, we looked at sentence structure and word choice. We made predictions about the content of the article based on the first sentence. We made a chart that listed conventions the writers used that we liked. We also generated a list of things published writers did NOT do. After the students reviewed lots of examples of good starter sentences, they were let loose to write their own topic sentences for their feature articles. The first sentences were not all publisher ready, but students did create sentences with a little sizzle to them.

Here are some of our favorite topic sentences we found in published articles:

Here are a few tips for writing a good hook courtesy of my fourth graders:

The finished articles were part of a Native American magazine project. As with sooo many of my projects, the magazine assignment became much bigger than I originally intended. However, when I saw the finished products, I was impressed. The final magazines looked like they came from a real printer. 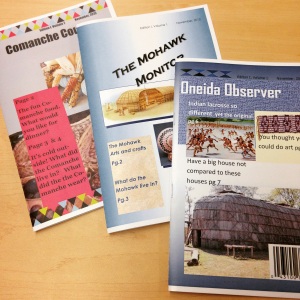