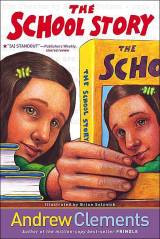 In Andrew Clements’ book The School Story, one character says that a school story is “a short novel about kids and stuff that happens mostly at school.” I asked a friend of mine who works in children’s publishing if this type of story really is one of the most popular genres in children’s literature as Clements implies in his book. She said that Clements is an expert at the school story and would know. I get it. These books are typically humorous and easy for children to read because they portray a world that the reader knows well– life at school. Here are a few titles that have received rave reviews from my children, my children’s friends, and my students. What other titles get a gold star?